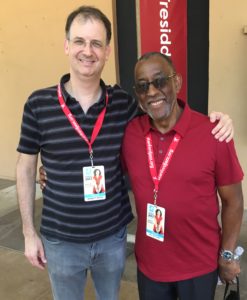 Me and Roy McCurdy

Hard to believe it’s been 35 years since I first attended the Stanford Jazz Workshop as a camper in 1984.  I’ve returned there to teach, learn and play and live & breathe jazz most summers since then.  This year was particularly inspiring.  In my musicianship classes, I basked in the glow of some amazing young musicians, many with perfect pitch and boundless energy, who always managed to play back whatever chromatic craziness I played at them…  Watch out world!  My combo met in the courtyard this year, which allows us to truly enjoy Northern California’s loveliness as we swung and learned.

In addition to a full teaching schedule, I got to perform in 3 concerts during my 6-day trip.  The first was a poignant and heartfelt celebration of the music of bassist/composer John Shiflett, who passed far too soon about 2 years ago.  Saxophonist Kris Strom and guitarist Scott Sorkin arranged Shifflett’s music for groups from 5-10 instruments, and we joyously remembered and celebrated our mutual friend from the stage in Campbell Recital Hall, where I saw John play so many times over the years.

Bassist Ruth Davies has led “Blues Night” at Stanford Jazz Festival for almost a decade.  It’d been a few years since I’d been there to join her for one; in past years the late Ndugu Chancler, she, I along with guitarist Danny Carron, were the house band for artists including: Robin Ford, Henry Butler, Keb Mo’ and others.  This year found us reunited behind Grammy-Nominated Blues artist Ruthie Foster.  (Thanks to keyboardist John Burr for sharing the keyboard chair with me!)  Ruthie flows effortlessly between soulful blues and gospel singing, groovy guitar playing and inspired songwriting.  It made for a super-fun evening of groovy blues and beyond. 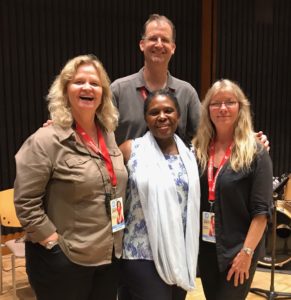 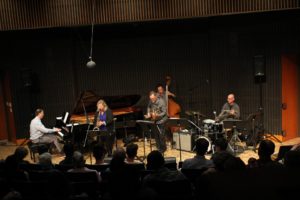 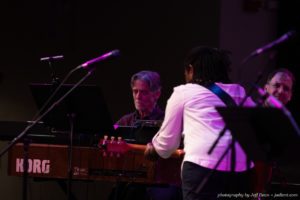 On the final Friday I got to swing with saxophonist/composer Lynn Speakman’s band.  Lynn is an amazing alto player from Pittsburgh, who I met at SJW, and also hug with during her NYC years.  We swung through some swinging hard bop, and got to play the Cannonball Adderley classic Azule Serape (written by Victor Feldman) with Cannonball’s long-time drummer Roy McCurdy.  Roy is 82 years young, and swings with a feel and passion of a guy half his age.  He was always one of my favorite drummers (and Billy Hart cites him as his primary influence); I’d always wanted to swing with Roy, and I’m glad we got to do it this summer.